To understand more about the history of Tropical Flower Arrangements popularity and where the trend began, we need to go back in history and study the Hawaiian and Polynesian cultures.

The Use of Leis in Polynesian and Hawaiian Custom

History tells us that Flowers and Leafs were worn by ancient Polynesians and Hawaiians as part of their custom.  They used tropical Flowers around their necks to signify their royalty and rank in their society.  They were also worn for religious purposes.  The concept was called Leis and were typically used as the Hula custom.  The Hawaiians became experts in making Leis and they mainly used them to celebrate an important life event or celebration. 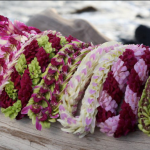 The Lei is a garland or wreath made out with flowers and leafs strung together with the intent to be worn.  The Leis were first used by Polynesians who visited the Hawaiians islands and they represented affection, friendship and were a welcome symbol.  The concept was later popularized with the development of Tourism between the Hawaiian Islands and the mainland United States in the 19th century.

The popularity of Tropical flowers continue to grow and whenever there was a celebration, flowers were used to decorate the outdoor venue as part of the hula custom.

Slowly but surely tropical flowers began to show up in homes and commercial spaces such as Hotels in Hawaii.  The idea of having Tropical Flowers in America became popular as well.

Being long lasting and exotic has contributed to their popularity in Europe and in the US.  In the late 1960’s and early 1970’s they really took off in America.  Today you find that there is a great demand for Tropical Flowers worldwide.  For this reason they are grown in many places around the world.

See the variety of fresh tropical flowers available for your next event.